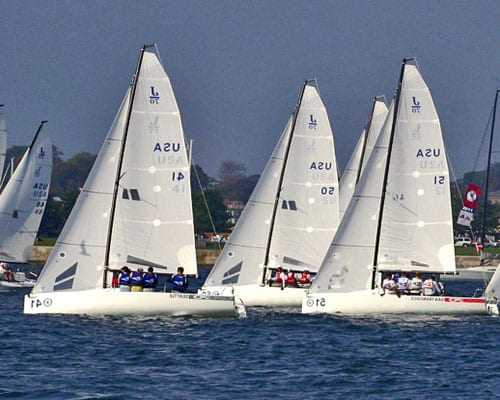 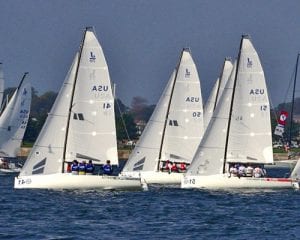 For three decades the Kieding family has been instrumental in building sailboat racing fleets in the Santa Barbara Harbor. Fleets they have started include the 8’ Sea Shell, J24s, J105s, J70s and Harbor 20s.

The first fleet started by the Kieding family was the 8’ Sea Shell fleet. In 1948, first generation Ray Kieding was looking for a small sailboat his boys, Bob and Dick, could use in the Santa Barbara Harbor. He had two Sea Shells shipped out in kit form from the Hagerty Company in Massachusetts. Within a few years, more than a dozen families were racing Sea Shells, and the competition began. Twenty-four boats were registered in 1950 when trophies for recognition of overall season winners were first awarded. Eventually, a couple of Santa Barbara wooden boat craftsmen, Charlie Eldridge, and his son, John, built the wooden Sea Shells locally.

In 1977, The Chandlery owner Bob Kieding sold the first local J24 sailboat to John Linthicum.  The boat was a success, and soon several J24s were racing in the waters just outside the harbor. The growth of the fleet exploded, and at its peak the fleet had twenty-four boats racing off Santa Barbara with starts and finishes administered from the deck of the Santa Barbara Yacht Club. Ray Kieding’s grandson, Ken Kieding, soon owned a J24, winning many races including the Pacific Coast Championships as well as other major West Coast regattas.

Then, in the 1990’s, Ken’s father Bob Kieding organized Santa Barbara’s J105 fleet of 35-footers. During the summer months, you will see six to eight of these larger one-design boats out on the starting line Wednesday evenings during the Wet Wednesday series.

Started in 2011 by Kenny Kieding, now the owner of The Chandlery Yacht Sales, the Santa Barbara Harbor 20 Fleet has been very active. There are currently 13 Harbor 20s in the fleet.  The fleet has been a welcome addition to the one-design scene in Santa Barbara and has been very active in local races. Because Santa Barbara’s harbor has little free sailing space, all races take place outside the breakwater, and this has led to one of Fleet 4’s claims to fame: the fleet was nicknamed The Ocean 20’s and they handle it all like a dream.  The Santa Barbara Fleet is the only H20 fleet in the world that races strictly with asymmetric spinnakers.