It Is About To Start
; 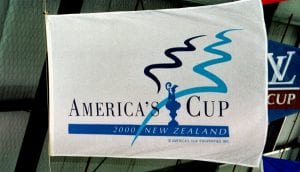 It was February of 2000, and two Santa Barbara newlyweds – one an avid sailboat racer since the age of 5, the other an eager and enthusiastic traveler – decided to plan their honeymoon to coincide with the 30th America’s Cup being held in Auckland, New Zealand. They managed to finagle their way onto an official press spectator boat and watch the action on the water — a super sweet memory from an amazing honeymoon.

Now, 17 years and two kids later, we are content to watch the action on YouTube and other social media outlets, although we’ve vowed some day to see the event in person again. After all, is there anything better than watching a major sporting event showcasing teams from around the world as they battle it out in high-performance multi-million dollar yachts? Add in Mother Nature as a primary player and you’ll begin to understand why WE LOVE AMERICA’S CUP!

On May 26th, 2017, Bermuda will host the 35th America’s Cup, AKA America’s Cup 2017. The Louis Vuitton America’s Cup Qualifiers will start on the 26th when the defending champions – Go USA! – will battle it out with the top challengers in a round robin series of races. Then on June 17th the America’s Cup Match races will begin. (We have the race schedule for you here.) 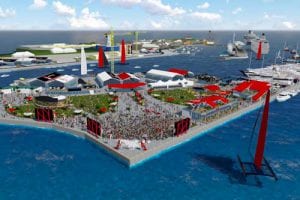 The America’s Cup Village will be located at the Royal Naval Dockyard, and as Bermuda is composed of over 180 islands, the location lends itself beautifully to all sorts of water activities. The Village will feature the team bases, food and drinks, a pit row, and a number of other concerts and entertainment options. There’s even a dedicated “Kids Zone” for those of us with budding racers of our own! Not to mention sandy beaches, warm breezes, and lots of sunshine…

So join two old married folks who still wistfully remember their dreamy honeymoon in New Zealand 17 years ago as we tune in to watch international sailing’s most prestigious event: the 35th America’s Cup! The rich and esteemed history associated with the event attracts the top yacht designers as well as the best sailors in the world. And the coverage promises to be unmatched for spectators from around the globe. Don’t miss it!

For more information about the 2017 America’s Cup, visit the official website: www.americascup.com.