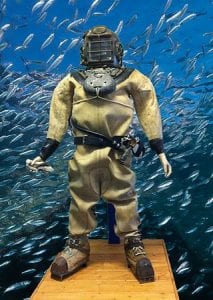 When visitors come to town, do you have a favorite place to take them in Santa Barbara? We’d like to suggest a spot that might not be on your list…yet! The Santa Barbara Maritime Museum is a gem in the harbor that contains a wealth of maritime history and tons of fascinating artifacts, perfect to share with visitors and locals alike.

The building in which the museum currently resides has a long and colorful history. It was first built in 1943 as a Works Progress Administration (WPA) project. During the war, the structure served as a Navy Training Center, and the Navy built the pier out front, known as the Navy Pier.

In the 1990’s the City of Santa Barbara purchased the building from the US Navy for a cool $2.4 million and then spent an additional $2 million in upgrades before opening the doors in July of 2000 as the present Maritime Museum.

Bob Kieding is a founding member of the museum

We are proud to say our very own Bob Kieding was one of the original founders of the museum and truly instrumental in bringing this project to fruition. The historic building now fulfills one of the original purposes of the WPA project: to house and display maritime artifacts.

Don’t forget to take a peek from the 4th-floor observation deck, where you can enjoy a truly breathtaking view of Santa Barbara

The museum is open every day except Wednesday from 10 am to 5 pm (it’s closed major holidays such as Thanksgiving, Christmas, and New Years). Visit http://www.sbmm.org for more information on this hidden gem. And don’t forget to add it to your list of places to visit the next time you’re looking for something to do with friends or family! You won’t be disappointed.